Review sites can be tough to manage. The fact that so many exist coupled with the near anonymity of the internet means that your tour company is likely to get a bad review at some point or another, no matter how hard you try. Oftentimes, this doesn’t impact your business, as customers are likely to willingly overlook one negative review among a sea of positive ones.

What is more likely to impact the customer’s opinion(opens in a new tab) is your response to such complaints. If you’re gracious and follow the “pity, praise, promise” method of apologizing, the customer will likely look favorably upon you and your company. However, if you respond with sarcasm, passive aggression, or doubt, as many of the businesses did below, that negative review will hold far more weight in the customer’s mind.

Without further ado, we bring you the follow-up to our earlier post “Five Hilariously Bad Management Responses on TripAdvisor”.

A negative review presents a learning opportunity. More likely than not, the person writing it has some valid points, despite how hard it might be to acknowledge them. And I get it — you’ve created your own business from the ground up, and you’ve put your heart and soul into it. Why should a random person on the internet be able to tear it down?

Still, arguing with the reviewer isn’t likely to do you any favors. Instead of getting angry, let the customer know that you’re listening. Inform them that you’ll take into account what they’re saying, and take their feedback seriously! There’s probably a grain of truth in it somewhere.

The following tour operator, however, seemed to content to ignore all the customer’s feedback and instead cast doubt back onto the customer: 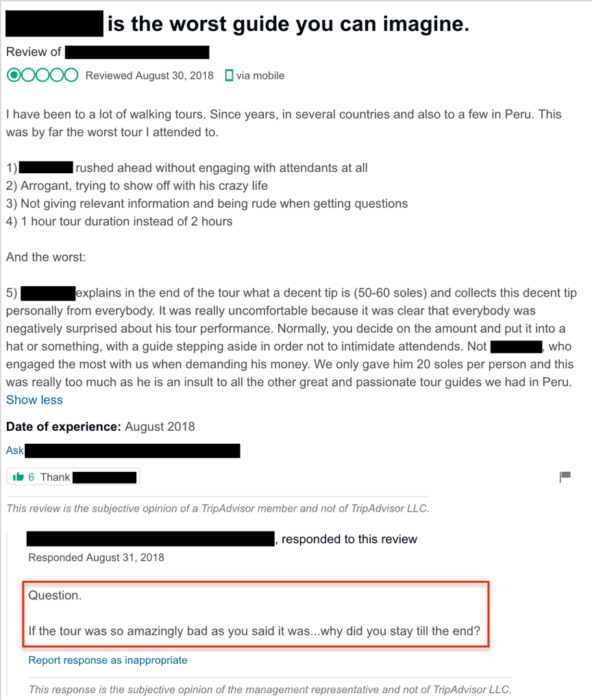 Perhaps they kept waiting for it to get better? Or maybe they had already blocked out the time in their schedule and didn’t have anything else to do? In either case, that’s not important to this review. What’s important is that the customer left disappointed and let down, which is the last thing a tour operator wants.

The next tour operator in this list responded to a bad review by attempting to tear the customer’s argument apart piece by piece. There’s nothing wrong with a company addressing a guest’s individual complaints if done so with the intent of remedying the situation, but mocking them isn’t a good look. And calling the customers “hotties”, even in a joking way, doesn’t exactly give off an aura of professionalism.

Notice also that there’s very little empathy in this response, as evidenced by the management’s comment: “I can’t even imagine how this procedure could have been such an inconvenience to you.” While that may be true, it’s probably better to leave this unsaid. 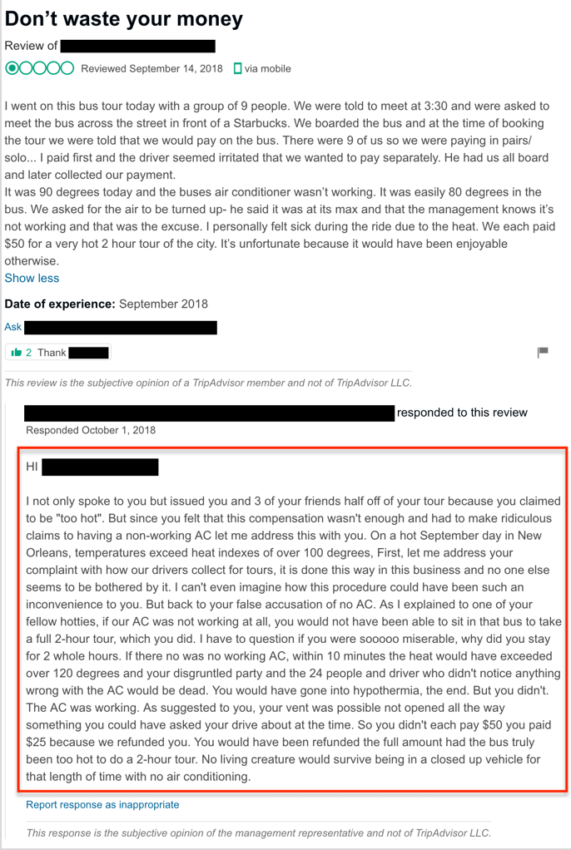 Ad hominem(opens in a new tab) is an example of a logical fallacy in which the respondent attacks the character of the person making the argument rather than the argument itself. This presents an issue not only because it involves personal attacks but also because it implies that the comments themselves aren’t worth refuting.

This next tour company in this list insinuates that people have always enjoyed their tours, so anyone who dislikes them must be a troll. That’s not to say there aren’t fake reviews out there, as we all know that this constitutes a real problem for review sites. However, if you truly think a review is a fake one, report it to TripAdvisor. Let them sort out the details, rather than accusing them in your response — otherwise you’ll come across as suspicious. And when people are trusting you with their hard-earned money and leisure time, the last thing you want to do is seem like someone they shouldn’t trust. 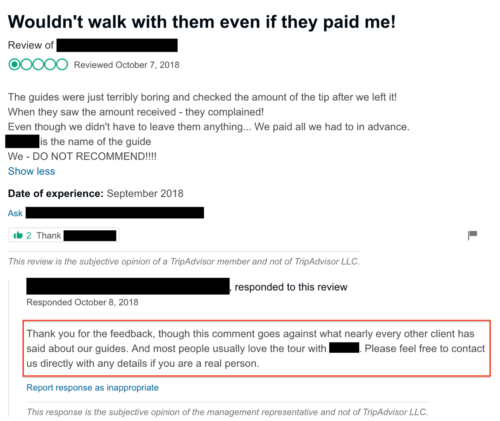 As much fun as it may be to type up a sarcastic response, it likely only serves the benefit of making you feel better. If you really feel the need to fight back, as the company did in the review below, consider doing so in your private diary or a conversation with a friend. Public insults like these typically don’t go over well:

The last of our series has it all: doubt that the customer’s claims are true, denial that there was anything wrong with their sales tactics, attacking the reviewer’s personality by claiming they fell asleep drunk at the table, and sarcastically commenting that the person’s view of the world is completely at odds with those of the rest of us. My summary doesn’t do it justice — you’ll have to see for yourself what exactly makes this problematic: 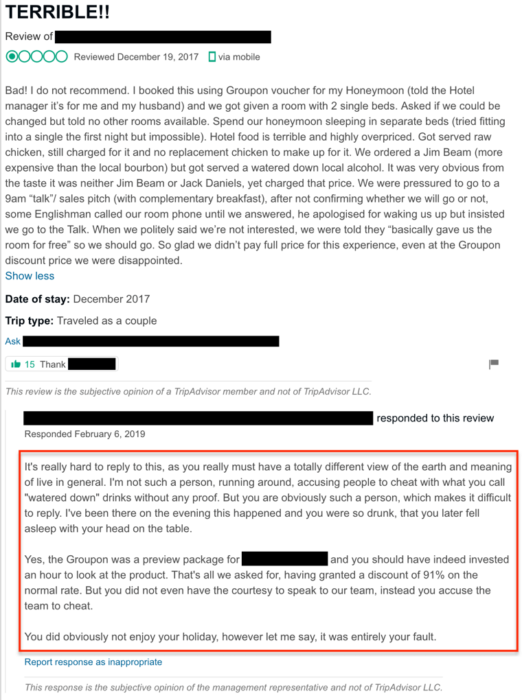 Things go wrong in every business, and that’s expected. If you run into problems, like the company below, the important thing is to follow the three Ps of apologizing: pity, praise, and promise. This management response was so thoughtful that I wanted to include it as an example of how you can address a negative review without coming across as defensive or petty: 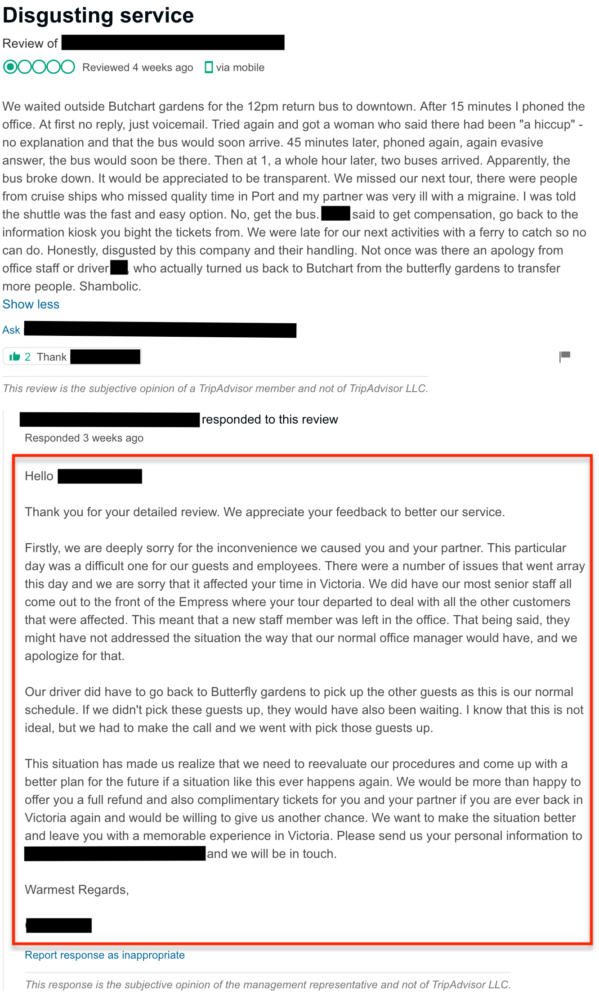 So, how did they get it right?

Pity: “First, we are deeply sorry for the inconvenience we caused you and your partner.”

That’s it. There’s no claiming that the reviewer is mistaken or attempt at justifying what happened. The company simply acknowledges that it messed up. By doing so, they’ve given me the impression that if I were to have a similar problem, they’d be willing to hear me out (unlike some of the other companies that made this list).

Praise: “We did have our most senior staff all come out to the front of the Empress where your tour departed to deal with all the customers that were affected.”

Giving credit where credit is due! The company acknowledged how its staff stepped in to help, showing that they recognize their employees’ attempts to remedy the situation. The fact that the owner also acknowledged that it was a difficult time for their employees rather than cast blame shows how they trust their staff. This just happened to be an off day, and their employees did the best that they could under the circumstances.

The company nails every aspect of the promise. They commented that they’re taking the reviewer’s feedback seriously and that these comments will lead to a change in the way the company handles tough situations. They’ve offered the guest a refund as well as complimentary tickets for a future tour. And they seem to be following through with it — because TripAdvisor is anonymous, they’ve asked the reviewer to send them their information so that they can get into contact.

If I saw a response like this, I wouldn’t hesitate to get in touch with the company, no matter what the original review said. Their ability to construct such an elegant yet sincere response indicates to me that they truly do want to do well by their customers. This is a tour operator that I could see bending over backwards to make sure that I enjoy myself, and that’s all I really care about when I’m making travel plans.

Just as having a good TripAdvisor presence is important to your company’s image, so is having a professional and up-to-date website. If you’re still struggling with this, we can help! Contact us for a free consultation and personalized quote.

By submitting this form, you agree to Tourism Tiger contacting you via email.

Ali is from Rockford, Illinois, home of the sock monkey, Cheap Trick, and the Rockford Peaches. She lived in Los Angeles for six years while she attended the University of Southern California for her bachelor’s degree in political economy and her master’s degree in public diplomacy. Wanting to improve her Spanish skills, she then moved to Santiago, Chile to get immersed in the language. Her favorite vacation was to Playa Jaco, Costa Rica, and her favorite tour was a bike tour of Helsinki, Finland.